All of us have encountered the Snow Queen at some point in our lives.

Through adaptations spanning film and television, opera and musicals, dance and videogames, Hans Christian Andersen’s 175-year-old tale – one of his longest and most highly acclaimed – has captivated audiences across generations.

First published during Christmas 1844, the story begins by setting up the adventure to come, with a prologue featuring a hobgoblin of the worst kind; no less than the devil himself.

In a creative mood, this sinister craftsman constructs a mirror imbued with the terrible power to make everything good that it reflects dwindle to nothing, while everything worthless becomes even more horrible and ugly. For the devil and his diabolical disciples, this reflected the world as it truly was.

En-route to the heavenly realm to set the looking glass before his arch-nemesis God, the devil’s mirror drops and shatters, scattering splinters across the entire world. Some smaller than a grain of sand, every minuscule piece retained the stupifying power of the whole mirror; once a sliver landed in an eyeball, the unlucky recipient would see only the bad side of things. When one pierces a chest, the heart turns to ice. 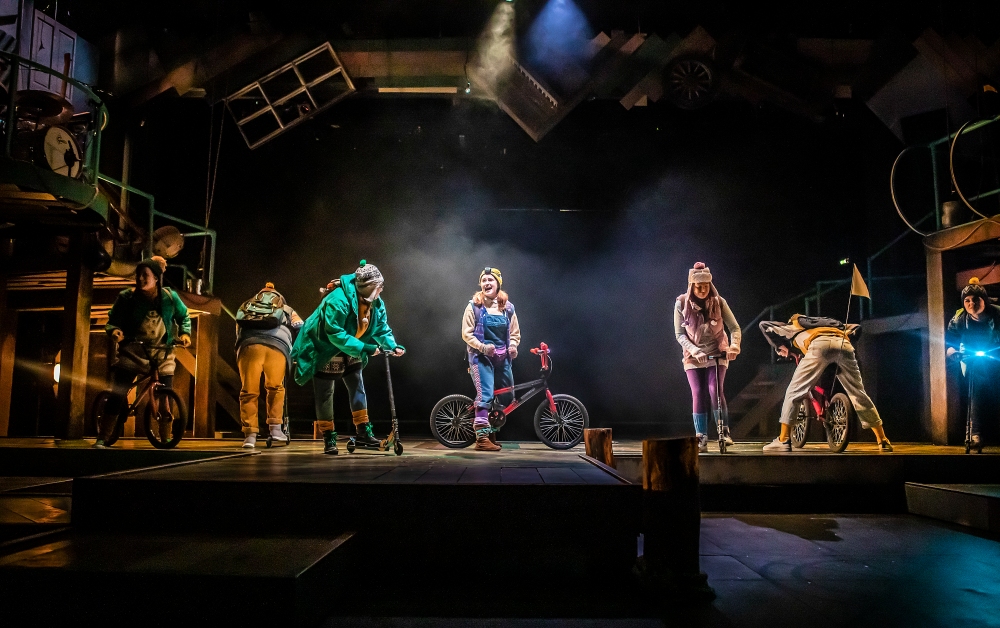 And so the stage is set for the story of gutsy Gerda and her fantastic adventure beyond the confines of her small town to rescue Kai; her best friend abducted by the mysterious Snow Queen. His eyes and heart pierced by the devilish fragments, it’s down to Gerda to save him and show everyone – Snow Queen included – they have been tricked and that the world is, in fact, a place of joy, hope, love and wonder forever.

Balancing the domestic and local with the epic and surreal, the townspeople fear what lies beyond their windows and the border of their small seaside town. Barricading themselves in, the residents grow more fearful as the weather worsens. As the adults in charge hunker down and encourage a bullish, stiff-upper-lip mentality that doesn’t reflect the reality of the situation, their attitude only serves to make the population more miserable.

When the kids speak up against the suppressing, belittling adults who should know better, we’re no more than a beat away from one of the cast throwing out an ‘OK Boomer’ as echoes of climate crisis, extinction rebellion and the pragmatic optimism of youth movements across the world sing through the knockabout fun.

Following on from last year’s gobsmacking production of A Christmas Carol, this show boasts brilliant traverse staging; the show playing to both sides at once on a simple set inspired by British seaside boardwalks. Conjuring childlike wonder and fear through evocative lighting and atmospherics, Designer Rhys Jarman takes a lead from Moonrise Kingdom, Mathilda, Stranger Things and The Secret Seven. 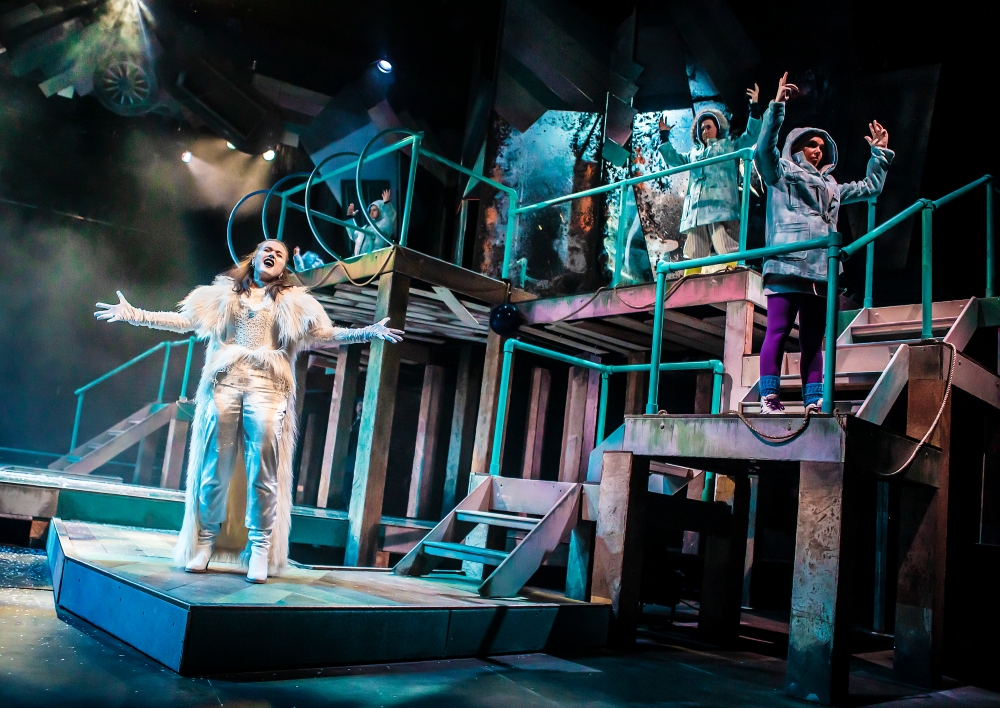 Shepherding a papercut-sharp, hilarious script from Laura Lindow, Director Mark Calvery ensures every single performer is operating at the exact same, exquisitely calibrated level. Landing somewhere north of Disney and south of the very best of the Carry On films, the cast colour every character with gloopy layers of personality and brilliant, occasionally bizarre tics, transforming what’s funny on the page into gut-busting stuff for all ages.

Lauren Waine is an effortlessly warm and engaging lead as the capable and propulsive Gerda, her relationship with best friend Kai – a sincere and funny Gregor MacKay – realistic and genuinely touching.

The Snow Queen herself, Elizabeth Carter, gets surprisingly limited stage time yet is pitch-perfect and just the right side of irredeemable, while Dr G. Hannabiell Sanders does an impeccable double shift as the Hermione Grainger-esque Liletta and bringer of djembe, congas and mbira (African thumb piano) to the score. A mix of intimate, rustic and folky instrumentation and epic orchestral sounds, the bombastic and omnipresent music bed of the story uses the instrumental skills of many of the performers to great effect as they move on and off the stage.

In a vicious, scenery-chewing competition for the show’s most valuable player, the knockabout gravity of Paula Penman and Jeremy Bradfield pulls the audience towards them in every scene they’re in. Penman’s bombastic, dry as sticks Elsie Orr is a marvellous creation, a crispy exterior with a gooey middle chock full of hilarious bits of subtle business, while Bradfield does solid work as Gerda’s dad while landing a near-standing ovation mid-show in a flamboyant bit of campery as an all-singing, all-dancing rose.

A thrilling, fabulous reimagining, we cheer as the children break out from their small town into the numinous world beyond – and the adulthood awaiting – smashing through borders both physical and intangible. A real rite of passage, this is a tale about the power of friendship and the importance of not giving up on people you love, with a timely reminder to listen to what our children have to say.

A precautionary tale too, the adventures of Gerda and team compel us to take account of all of the splinters that have worked their ways into our eyes and hearts over the years, to take stock of our individual burden of prejudices and perceptions that separate us from the magic and wonder all around us, to work hard and together to disperse the negativity that drives us apart, the fear of the other and the unknown that keeps us where we are, to thaw out our hearts before it’s too late, before we wither and freeze.

The Snow Queen is playing at Northern Stage until 4th January 2020.