The Heart Machine team – on a seemingly endless quest for ever-grander piles of attractively arranged old bricks in which to put on a show – took over looming medieval masterpiece Newcastle Cathedral to celebrate the 90th birthday of the Grand Dame of silent cinema, Metropolis.

Following up their blistering screenings of  Nosferatu, Dr Jekyll and Mr Hyde and The Cabinet of Dr. Caligari at Newcastle Castle, and nearly 90 years to the night from the 1927 Berlin premiere, the pews were packed out for this anniversary presentation accompanied by the Old Police House Collective and special guests from the Bradford Scratch Orchestra.

Asked to introduce the film and play compère for the evening I kicked off the night skittering through its troubled production, muted original reception and subsequent lavish praise, and the breathtaking influence of an enthralling, undeniable cornerstone of cinema and 20th century pop culture.

Good evening everyone and welcome to this very special 90th anniversary screening of Metropolis here in the stunning St Nick’s Cathedral.

Undoubtably one of my absolute favourite films of all time, it’s constantly battling with Nosferatu and 2001: A Space Odyssey for the top spot. I’ve seen it countless times now, and my first time was in 2002 when Tyneside Cinema was showing the F. W. Murnau Foundation Restored Authorised Edition.

At the time I couldn’t persuade anyone to go with me to see a black and white, silent, German expressionist science fiction film; much less one playing at a funny independent picturehouse down a back lane that no doubt was showing all kinds of mucky French films too.

dripping with social commentary, the film is a highly-stylised fantasy

I knew about the film and had been dying to see it for years, so I set off and went to the cinema on my own for the very first time. Expecting to have the place more or less to myself, I ended up just managing to grab one of the last-remaining seats for what ended up being a sold out show.

When it ended I sat there gobsmacked, both at the film itself but also that there were people out there who wanted to see this stuff; people like me, and people like us here tonight in this incredible building.

Released in 1927 and directed by the Austrian-German Master of Darkness himself, Fritz Lang, Metropolis was a gruelling and arduous experience for the actors, crew and thousands of extras involved in realising his vision. With filming taking place for over a year and a budget that quadruped over the course of production, it went on to meet a mixed reception upon release. While critics found the film beautiful – and were full of praise for the incredibly intricate special effects work in particular – they accused the story of being naïve, clichéd and muddled.

the film wasn’t seen in its complete form for decades

The excessive running time of the film also came in for criticism, as did its alleged Communist message. After its premiere in Berlin in January 1927, nearly a quarter of the footage was removed for subsequent screenings, which meant the film wasn’t seen in its complete form for decades.

Since the 1970s many attempts have been made to restore the film, and in 1984 producer and electronic dance music pioneer Giorgio Moroder released a shortened, gloriously eighties colourised version with a soundtrack by Freddie Mercury, Bonnie Tyler and more, a version that for many people was their first experience of the film. 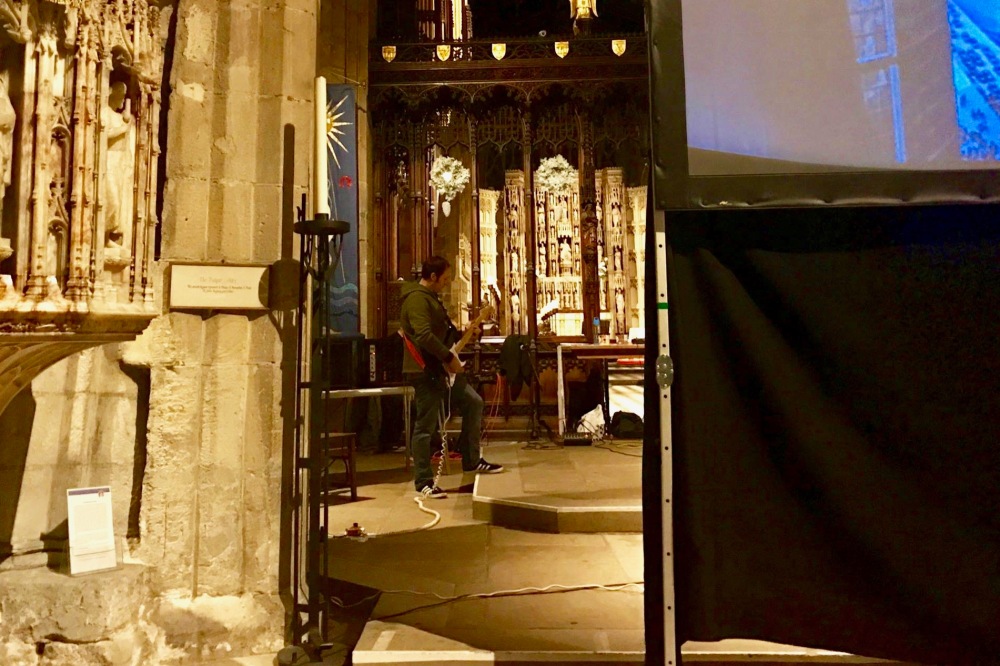 Years later a new reconstruction of Metropolis was shown at the Berlin Film Festival in 2001 which ran at just under two hours – the one I saw during my unforgettable visit to Tyneside Cinema – and in 2008 the impossible occurred when a nearly-complete but damaged print of the original cut of the film was found in in the archives of the Museo del Cine in Buenos Aires.

After a long and fastidious restoration process, this battered but nevertheless glorious new cut of the film was shown at a joint premiere on screens in Berlin and Frankfurt on 12th February 2010. The film we are about to see tonight is this restoration, which, despite years of searching across the globe, is still missing 5 minutes of footage from the version originally screened 90 years ago.

growing hugely in stature and reputation since its release, and moving far beyond those too-soon criticisms

As such, you’ll see these grainy bits of restored footage peppered throughout the film, and you’ll likely be spellbound and shocked by the amount of essential plot and character that was missing for decades. You’ll also probably be astonished that despite the film being incomplete, it still runs to just under two and a half hours. 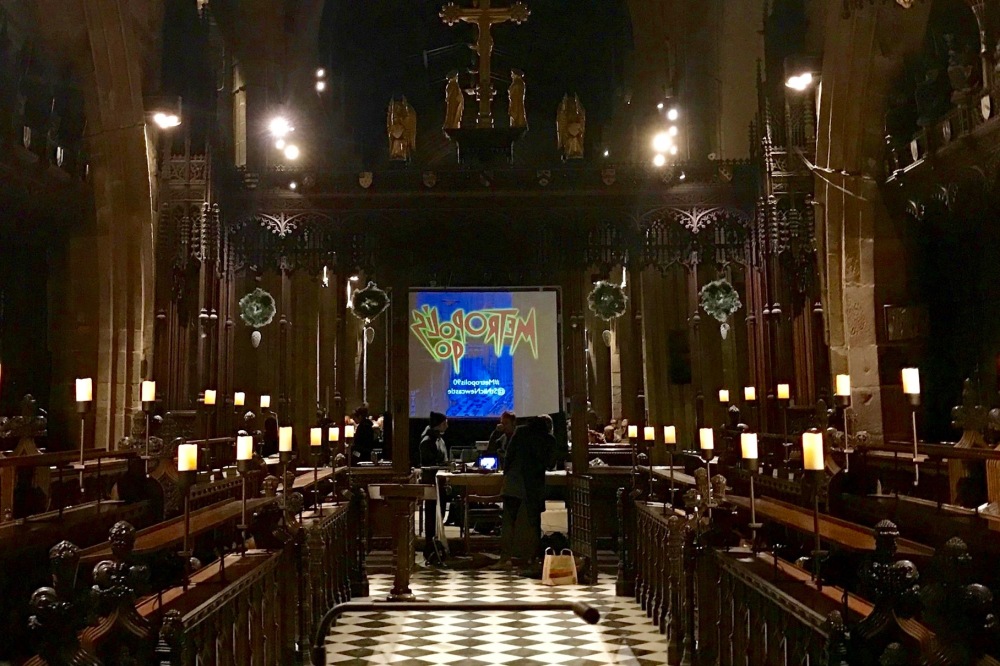 As unapologetically lengthy and stately as it is, the stunning visuals encompassed within those 147 minutes are only part of the story here tonight. You may have noticed the music being played over the cathedral speakers as you came in; that music was from the original motion picture soundtrack, composed for that January 1927 Berlin premiere.

That original score combined a classical orchestral voice with modernist touches, and the score played a prominent role during the film’s production, with the composer often playing piano on set to inform the performances of the actors.

Tonight, we turn this around entirely, with the actors and the final film itself informing the music you’ll hear during this one time only live performance by the amazing artists of the Old Police House Collective, with special guest musicians from the Bradford Scratch Orchestra. 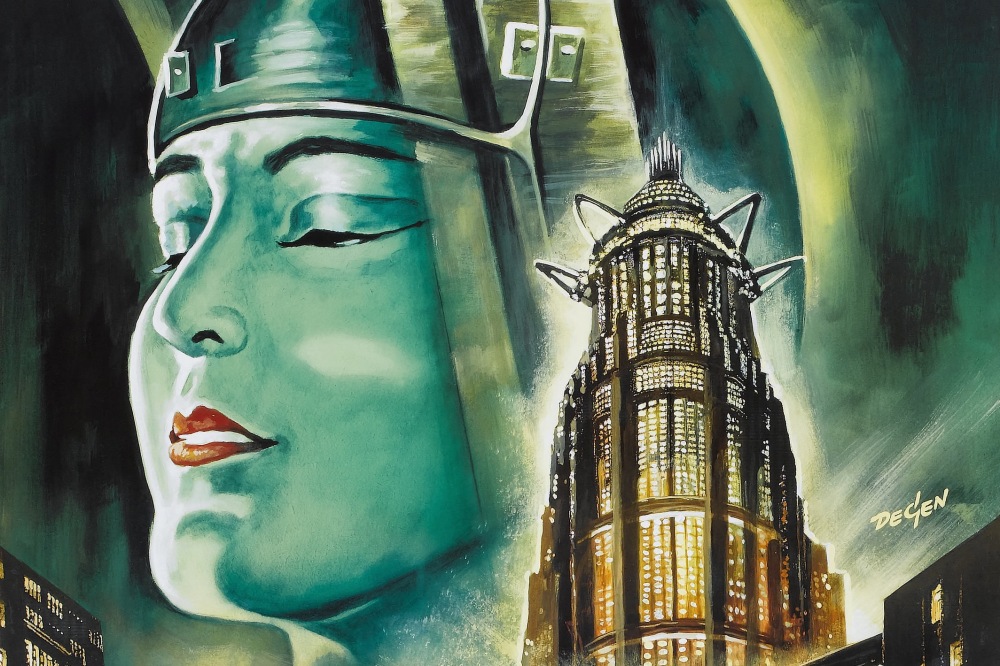 Growing hugely in stature and reputation since its release, and moving far beyond those too-soon criticisms, the film is a masterpiece and an icon of moving image history that has influenced cinema and filmmakers for decades, firing the imagination of everyone who sees it. From Star Wars to The Fifth Element, Madonna’s Express Yourself to Queen’s Radio Ga Ga, fashion collections by Tom Ford and much, much more, Metropolis’s influence seeps into pop culture at every opportunity.

Mesmerising, awe-inspiring and ridiculously re-watchable, Metropolis approaches its 100th birthday in rude health. Dripping with social commentary, the film is a highly-stylised fantasy, it’s timelessness meaning it has always been interpreted by audiences across the decades according to the social and political situation of the time.

With its tale of a repressed and unrepresented working class manipulated into rising up behind a divisive and populist leader to overthrow their out-of-touch liberal rulers, the film still talks to us about the world we live in today, ultimately offering up a message of hope, and the potential for us all to rise beyond the petty differences of class, race, gender – and even species – that divide us.

Ladies and gentlemen, workers and robots, welcome to Metropolis.