In a not-too-distant future the Internet has evolved far beyond our wildest imaginings, and blossomed into an ever-expanding network of virtual reality realms known as The Nether.

Near-indistinguishable from real life, users can log in and create a new identity to escape the physical world and indulge in their innermost desires; from harmless escapism to the deepest most unmentionable yearnings.

A dark side of this incredible freedom is uncovered by Detective Morris, who begins an investigation into a realm known only as The Hideaway, a place where consenting adults meet to fulfil their most depraved fantasies involving children. As the investigation unfolds, questions of ethical behaviour, morality, consent, and freedom of expression combine in this devastating and brilliant work that explores the consequences of making dreams a reality.

A strong Kubrickian vibe runs through The Nether, with a Clockwork Orange-like focus on morality, societal expectations, crime and punishment in a frighteningly plausible future; a beautifully realised stark white set reminiscent of the gleaming interiors of 2001: A Space Odyssey; and a clinical detachment that captures the gaze and holds it unblinking on the most unspeakable compulsions of humanity.

The tight cast are stellar across the board. Charlotte Wood commands as Detective Morris, the firm interrogator hiding a big secret, emotions broiling just beneath her calm, ruthlessly business-like persona. Christopher Theobold has charisma to burn as the fastidious and non-judgemental creator of his secret realm, obsessive in his desire to create an entirely perfect world, and eventually unravelled by his own narcissism and pride.

a brilliantly played, sparkling piece of speculative fiction that will fuel the mind and disturb the senses

Rosie Bonner lands an astounding home run in a fascinatingly difficult role as a 12-year-old girl avatar concealing the consenting adult beyond, walking a tightrope between storybook innocence and Lolita-like coquettishness, further compounding the Kubrickian undertones. James Riley is all first day on the job nervousness as the charming and hugely sympathetic new entrant to The Hideaway, while Elliot McClenaghan is a seething ball of nervous energy, caught under the bright white light and tight scrutiny of Detective Morris, addicted to The Hideaway and apprehended on the verge of becoming a Shade – a permanent resident of the Nether. 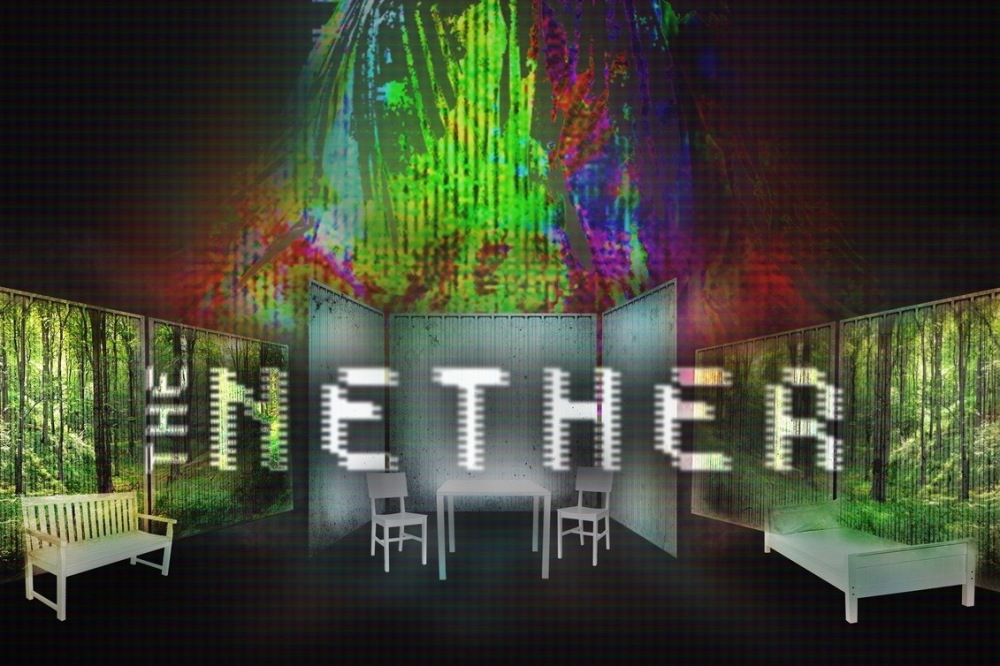 A true ensemble piece with a huge secret hidden in plain sight, The Nether is an extraordinary achievement. With little more than some metal screens, a projector, and a seemingly endless supply of white paint, the whole production works to create a complete world beyond the scant two locations presented. Glass-brittle hints scattered throughout conjure up a future Earth ravaged by environmental disaster, hosting a population compelled to seek solace in the digital world.

That this seeming escapism from what is ostensibly ‘reality’ is never negatively commented on by the play – and is actually presented as a plausibly preferable, ethical, and positive future for humanity – is just one of its many achievements.

Asking endlessly uncomfortable questions and giving no easy answers, The Nether is a brilliantly played, sparkling piece of speculative fiction that will fuel the mind and disturb the senses far beyond the limits of the stage.